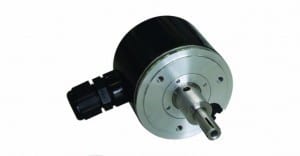 Encoders are components that are added to a direct current motor in order to convert the mechanical motion into digital pulses that can be interpreted by the integrated control electronics. The main purpose of the various types of encoders  is to transform information from one format to another for standardisation, speed adjustment or safety control.

DC motors have a complex position and speed control, their behaviour is not linear and relies heavily on the load borne; this is why they need an encoder (which may be embedded or not) to determine and ensure a correct shaft position.

There are different types of encoders depending on their design and functionality. In the post below we will analyse the main types, how they function and their main characteristics.

How does an encoder work

In regard to its composition, an encoder is composed of a disc that is connected to a rotating shaft. The disc may be manufactured out of glass or plastic, and it is coded by combining transparent and opaque areas that block the passage of light.

Next, in regard to its operation, when the shaft rotates, the infrared light source emits a light that is interpreted by an optical sensor (or phototransistor), which in turn generates the digital pulses depending on whether the light passes through the disc or is blocked by the opaque regions. This results in an information sequence that allows for the control of aspects such as direction of motion, turning radius, and in certain cases, speed.

Some of its most widespread applications are robotics, small household appliances or certain industrial applications that require an angular measurement.

It is the most widespread type of encoder and is composed of a light source, a rotating disc and a light detector.

The disc is mounted on a rotating shaft and has opaque and transparent regions on its face. The light emitted by the source is received by the photodetector or interrupted by the opaque region pattern, resulting in pulse signals that are read by a controller which includes a microprocessor to determine the exact angle of the shaft.

It is a device or sensor that has a graduated scale to determine its position. Sensors in the encoder read the scale and later convert its encoded position into a digital signal that can be interpreted by an electronic motion controller.

Linear encoders may be absolute or incremental, and there are different types of linear encoders depending on the technology used in its mechanism.

This type of encoder is used in metrology, motion systems and to control high-precision instruments when manufacturing tools.

Absolute encoders offer a single code for each position and are divided into two groups: single-turn encoders and multi-turn absolute encoders. Their size is small, which allows for a simpler integration.

This is an optical encoder that determines the position angle based on incremental calculations, where each position is completely unique.

This is a type of rotating incremental encoder that has the ability to indicate the position, direction and speed of motion.

In regard to its applications, we can find them in many electric consumer products and a myriad of commercial applications. Among its many advantages, we can mention its flexibility, simplicity and durability.

Do you have an electromechanical project in your hands? Are you interested in information related to the selection of electric motors for small drive systems? Download this interesting eBook by CLR and you will learn how to select the best motor for your electromechanics projects.