In the design of a gear motor or gear box it is paramount to keep in mind several factors in order to fulfil the commercial demands, and those of the application. The mechanism’s efficiency, its noise levels, or its durability and reliability are key factors. With this in mind, selecting the right rolling bearings in each project is of the utmost importance in order to improve the performance and operation of the speed reducer in the machine. But, what types of rolling bearings exist? What do I have to keep in mind in regards to the work of the speed reducer? You will find this article interesting.

The role of rolling bearings in the speed reducer’s operation

Bearings or rolling bearings help us improve the speed reducer’s efficiency, improving their performance in order to limit the loss of energy associated to gears, and to prevent overheating of the gear box. In short, the action of this mechanical components aims at reducing the friction between the shaft and the parts connected to it, acting as a support and facilitating the movement of the parts of any mechanism.

You will find this article interesting: Speed reducers: how to improve their efficiency

On the other hand, rolling bearings also have an important influence over the static load and dynamic load capacity of the gear motor. Its selection may limit these parameters depending on how they allow for a larger or smaller contact area with the shaft.

How can the load capacity of a rolling bearing be calculated? Comparing the dynamic load capacity data with the service life period. This service life or life span of the rolling bearing is linked to the appearance of fatigue, which may be caused by the influence of external agents (moisture, dust, etc.) and the wear caused by the load and the operation speed. Therefore, its duration can be determined during the speed reducer service life tests, by observing the moment when the first damage appears.

Concepts of axial and radial load

In transmission systems, when their components transmit a motion, radial loads and axial loads are generated at the end of the shaft, which should be verified. Rolling bearings are important, since they help the shaft withstand either radial or axial loads, or a combination thereof; always preventing certain limits set forth by the speed reducer manufacturers from being exceeded.

Even though there are a number of variables and specific rolling bearings for highly specific industrial applications, here we describe the four most important types.

You may like: Rolling bearing calculation: analysis of the static and dynamic loads

Ball bearings are the most widespread option and consist of a multitude of variants according to their shape and can be used in multiple applications. The choice of a type of ball bearing will depend on the industrial application for which it will be used, as well as the load to which it will be exposed. The most common are:

They have four parts: the outer ring, the inner ring, the balls, and the cage or separator, and to increase the contact area and favor the resistance of the transmission to higher loads, the balls run in grimaces built into the rings. The separator for its part. keeps the wheels separated avoiding contacts with each other.

Their design features cylindrical, thin, long rollers along their diametral plane. They are very suitable for applications where space is limited (the axial dimension of the needles or rollers is much larger than the radial one), and they are also the ideal option when the transmission requires a high radial load capacity. 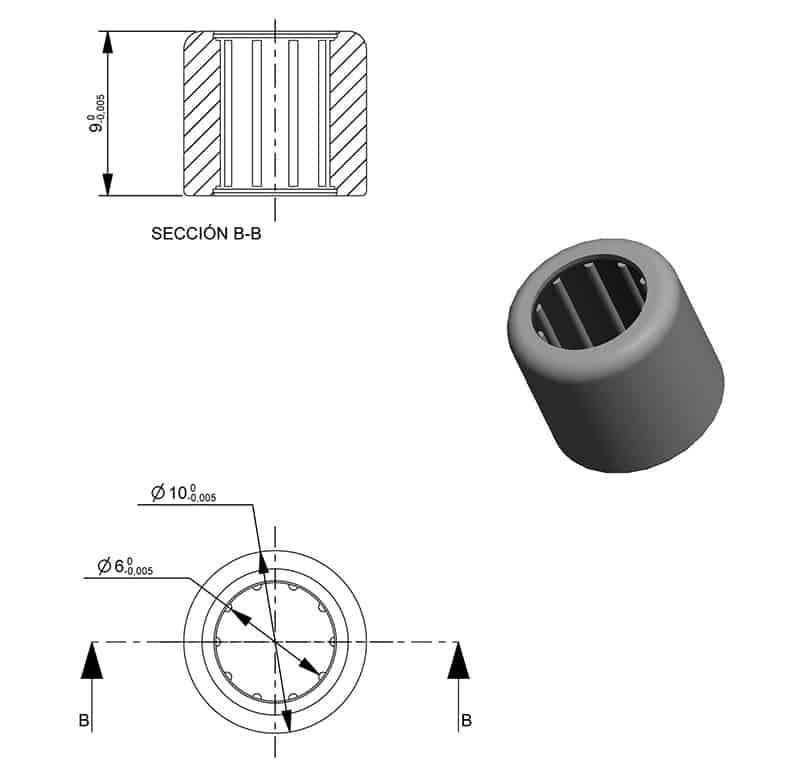 These components have a line of cylindrical rollers encaged between solid external and internal rings and a ring with cylindrical rollers. The cage prevents the cylindrical rollers to contact each other while rolling, preventing unnecessary friction and resisting rapid accelerations and at high speeds . They are similar to ball bearings, but withstand higher loads since they have contact lines instead of contact points.

This is the most advisable solution when our project has significant axial loads.

Are you clear on what types of rolling bearings you are able to use in your project? CLR, through its Mootio Components online store of mechanical components, offers rolling bearings for small projects related to electromechanics. Would you like to receive advice? Are you looking for an actuation mechanism and you don’t know where to begin? Contact our engineering team; we are certain we will be able to design the high-performance gear motor you need.