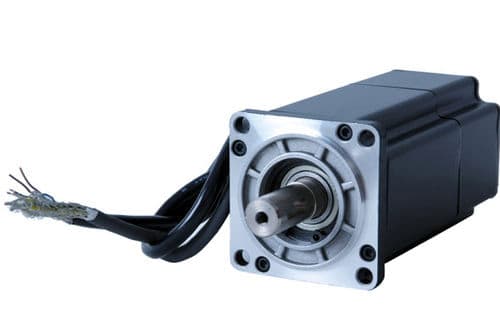 Selection of an electric motor is fundamental for any electromechanical project. When the project requires maximum precision, it is increasingly common to think about the star of this article: servo motor. Get to know how they work and why they are one of the basic devices in robotics and industrial sectors that require highly precise motions.

What is a servo motor?

Also called servos, they are actuation devices for the precise control of speed, torque and position. They have a better performance and precision when compared to actuations based on frequency converters, since these do not offer position control and have low effectiveness at low speeds.

A servo motor is a device that contains an encoder which converts the mechanical motion (turns of the shaft) into digital pulses interpreted by a motion controller. It also contains a driver; and in conjunction, they make up a circuit that governs the position, torque and speed.

Their main specifications are torque and speed.

Servomotors can be found in camera zooms, lift doors, or tools we may have at home.

We have mentioned what a servomotor is, but, what is it composed of exactly? How does it work? We will see this next.

Parts of a servo motor

A servo motor is composed of:

Using a servo motor implies an unnecessary extra cost for some, since there are also step motors (a more affordable option that offers a precision that is close to that of servo motors). So what is a step motor?

A step motor is an electrical motor, but it does not spin; instead, as its name implies, it moves step-by-step. In other words, they do not spin continuously; they do so by a specific number of degrees. You can check out our post dedicated to step motors and find out more in-depth when to use it, and why.

So, when do you use a servo motor?

Servo motors are considered to be fundamental in the design and manufacturing of robots. These are systems that require a precise and controlled mechanical positioning. We can see them on fields such as industrial automation or the growing robotic surgery field.

With the emergence of digital servo motors, great advances have been achieved in regards to control and efficiency. The increase in performance results from the control electronics using a microcontroller to do all the work. This fact allows more control pulses to be fed to the motor, increasing the motion precision and performance.

On the other hand, more readings of the potentiometer are made per second, and more efficient and smaller drivers are used, which allow for controlling more power with a much smaller circuit. If this wasn’t enough, the microcontroller offers the chance to program certain parameters such as travel, central position, the neutral zone, etc.

Servo motors allow us to create all kinds of controlled movements, and are undoubtedly an important breakthrough when developing new technologies.

Do you need help when selecting the best electric motor for small actuators? Download CLR’s eBook and start making selections with confidence.

1 thought on “What is a servo motor and when is it used?”